What do you need to know about Ethiopia? 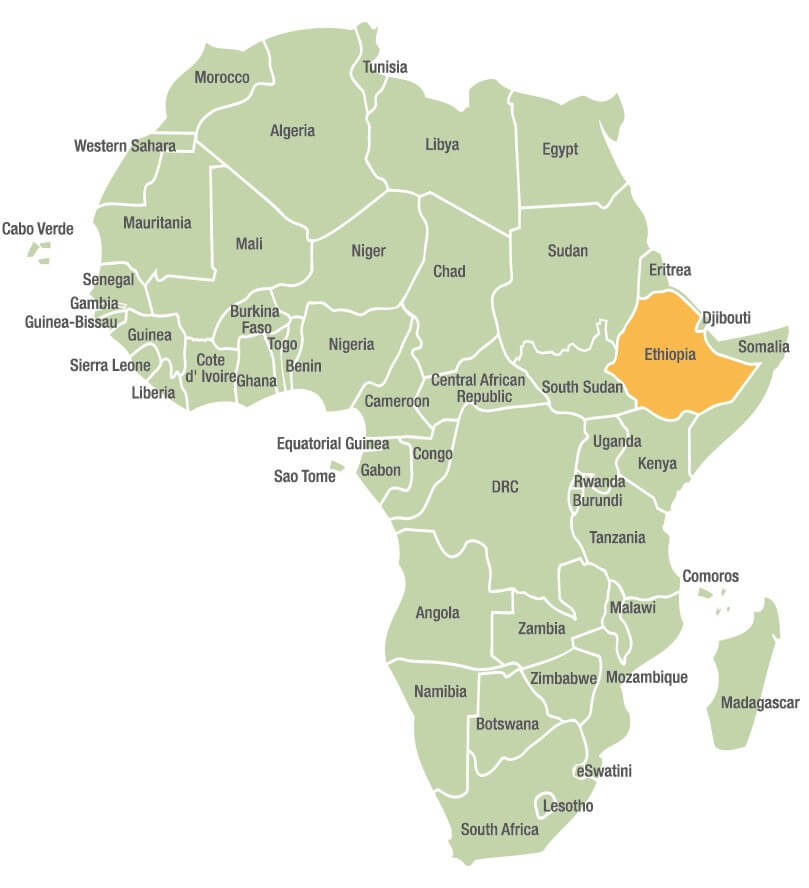 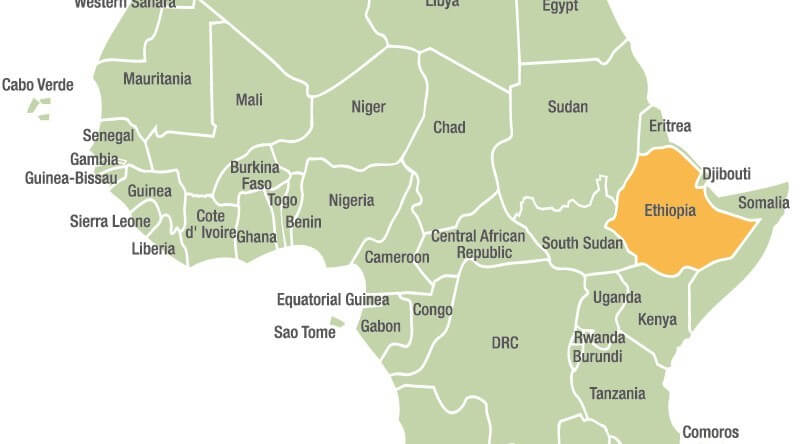 Area
1.1 million km²
Population
Approximately 105 million.
Ethiopia is a multi-ethnic state with more than 80 ethnic groups.
Capital
Addis Ababa
Official language
Amharic. In addition, there are an estimated 80 additional languages with around 200 dialects. English is widely used as an educational language and in secondary schools.
Neighboring countries
In the north Eritrea, in the south Kenya, in the east Djibouti and Somalia as well as in the west Sudan.
What voltage is there in Ethiopia?
The mains voltage is 220 V at a frequency of 50 Hz. Since the mains voltage is almost identical to the one in Germany, 230 Volt, you can use your electrical appliances there. However, a travel adapter of type C, D, F, J or L is recommended, as the type C and F covers are not 100%.

Currency
Ethiopian Birr. There are banknotes worth 1, 5, 10, 50 and 100 birr as well as coins worth 1, 5, 10, 25 and 50 cents. 100 cents make 1 Birr.
What currencies and means of payment can one use in Ethiopia?
Cash
The national currency and the official means of payment at the same time is the Ethiopian Birr. This is divided into 100 Santim (cents). The national currency is available in coins and notes. USD, Euro and Pound Sterling can only be changed into the national currency in the capital and a few cities in Ethiopia.
Credit and debit cards
Cashless payment is hardly common in Ethiopia. Credit cards are accepted only in the capital or in hotels. Debit cards are not accepted anywhere in Ethiopia.
Traveler's checks
Traveler's checks are no longer accepted due to the high rate of counterfeiting.
Which language is spoken in Ethiopia?
The official language in Ethiopia is Amharic. However, more than 80 other languages are spoken with more than 200 dialects belonging to two language families. There is the Afro-Asian language family, this includes u. a. the Semitic and Omotic languages as well as the family of the Nilosaharian languages, this includes u. a. Kunama and Anyak / Anwak. 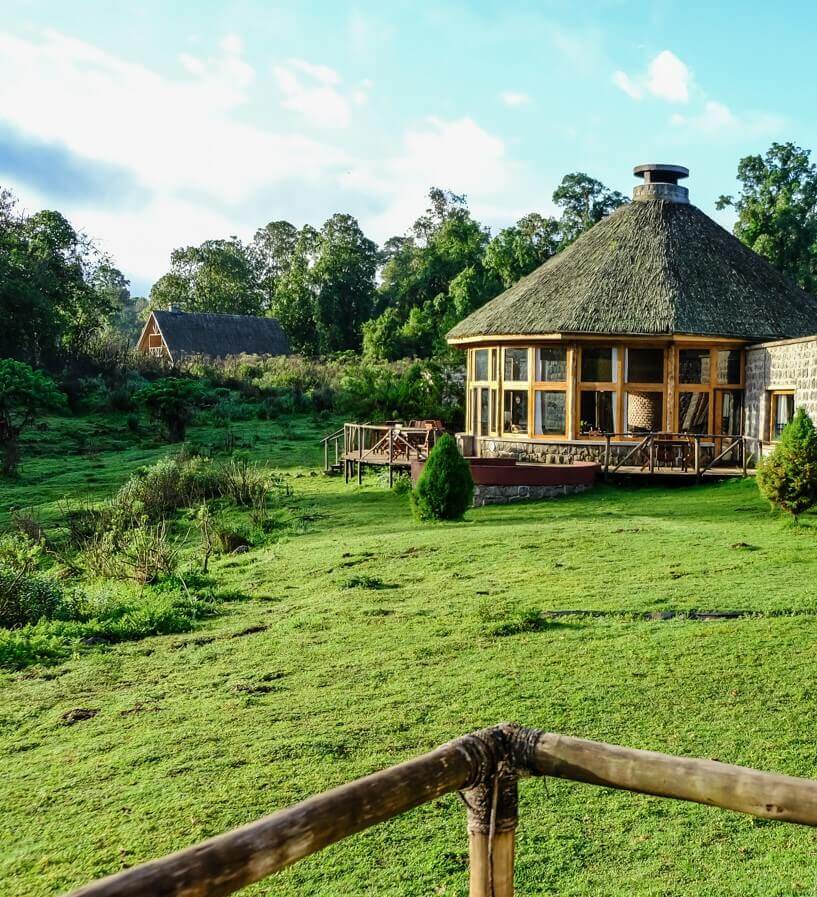 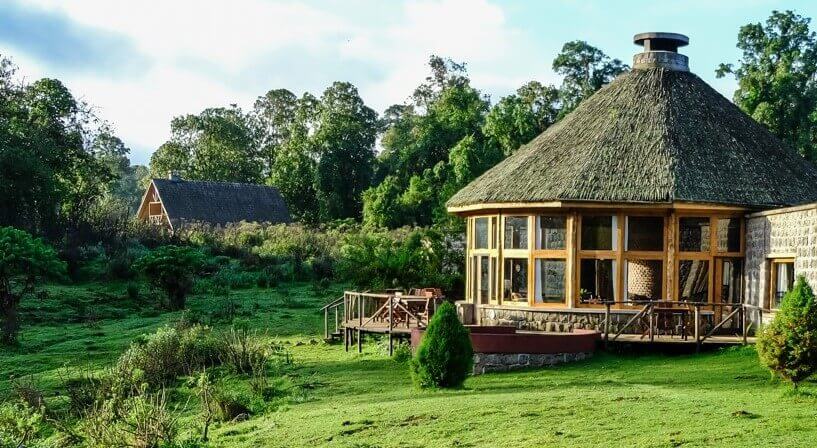 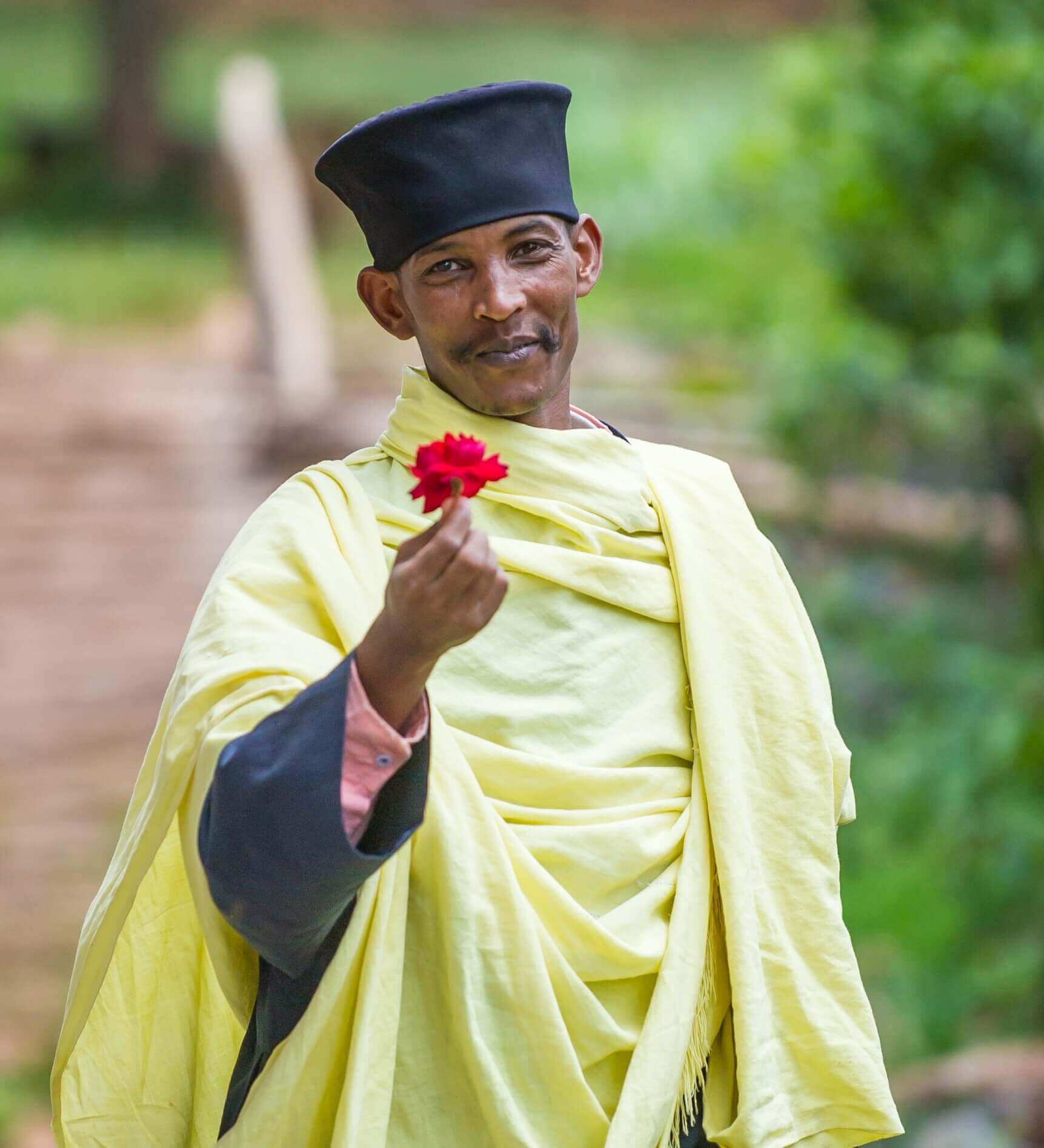 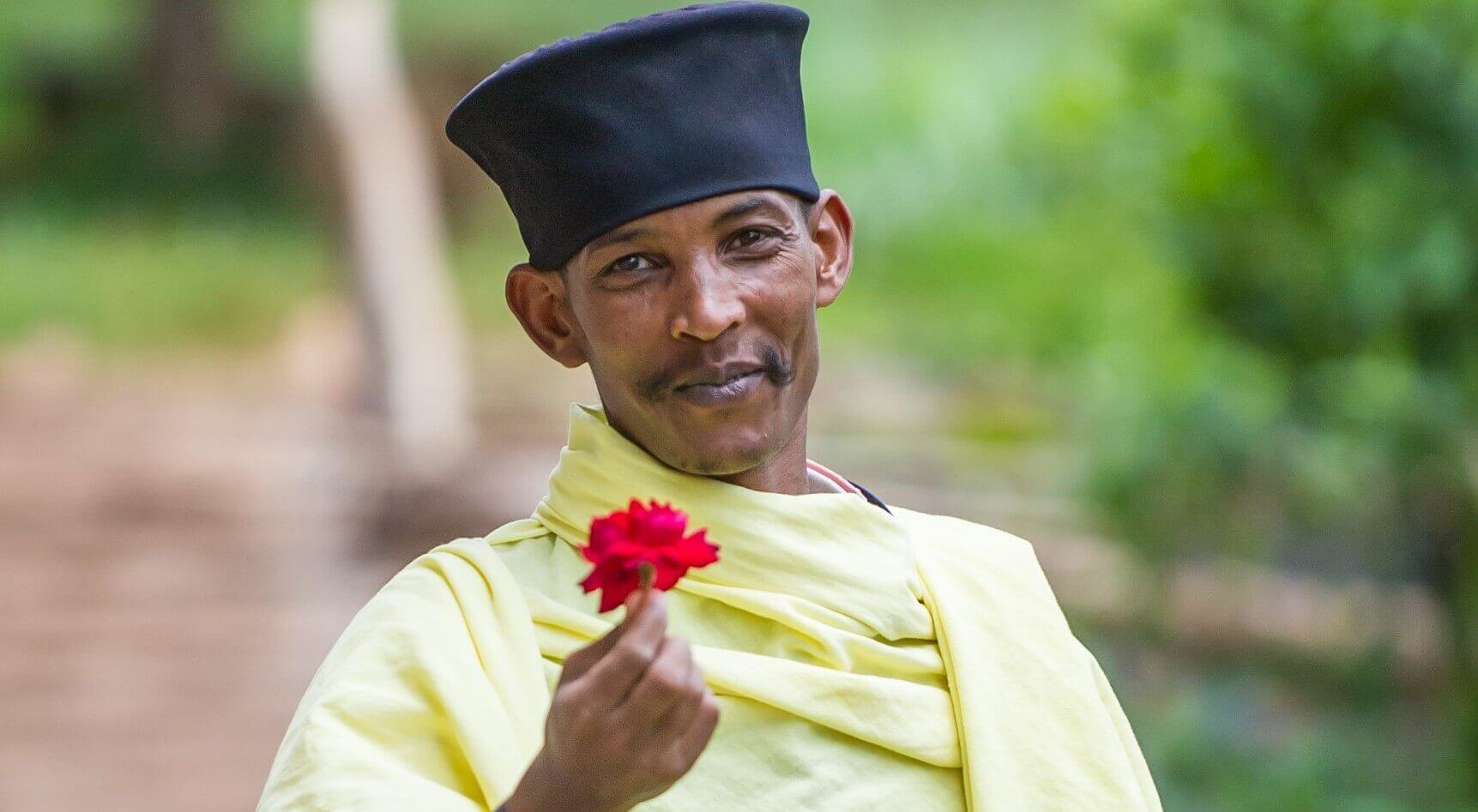 Which religions are represented in Ethiopia?
The two major religious communities are Ethiopian Orthodox Christians (over 40%) and Sunni Muslims (about 35%). There are also Ethiopian-Protestant Christians, Catholics, followers of natural religions and Jews. About 90% of the inhabitants belong to different denominations. The religious affiliation is as different as the ethnic composition.
What do you have to consider when entering Ethiopia?
The identity documents must be valid for at least six months when entering Ethiopia.
A visa is required for Ethiopia. The visa is available upon arrival only for 33 countries at the airport for a fee of currently US $ 50 per person (also payable in euros). Ethiopian visa can be applied online on www.evisa.gov.et. Please contact the Ethiopian embassy in your country.Have your hotel list at the airport ready, as you will need the name of the hotel in Addis Ababa to apply for a visa.
Which clothes should be worn when traveling to Ethiopia?
In the lower regions, it is advisable to wear light, durable clothing in bright colors, such as cotton. With long sleeves and pants, you should protect yourself from the sun during the day and the mosquitoes in the evening. In the highlands, you need warm, water-repellent clothing all year round. A pair of sunglasses is always in your luggage.

What are the main holidays in Ethiopia?

The Ethiopian era is 7 years and 8 months behind our Gregorian calendar. The calendar year begins in Ethiopia on September 11, and in leap years on September 12. So while the rest of the world celebrated the millennium at the turn of the year 1999/2000, Ethiopia was still in the 1990s.

In Ethiopia, there are 12 months, each with 30 days and a leap month at the end of the year with 5 or 6 days (depending on whether it is a leap year or not). Thus, Ethiopia is the country of the 13 months, which is also provided with the attribute "13 months of sunshine". Through international connections such as air traffic, Ethiopia has a coexistence of both calendars, and calendars with both valid dates are available throughout the country. There are still differences in the calculation of the time of day, with the Ethiopian day starting at 6:00 with zero hour.

When is the best time to travel to Ethiopia?

The best months to go to Ethiopia are from September to May, as these months are outside the main rainy season. From November to January the temperatures are most comfortable. In these months, the number of hours of sunshine with an average of 10 hours a day is highest. There are also a few regional differences: the historical route in the north is most of the time between September and April. For the Omo country in the south, the months end of July to mid-October and late November to mid-February, the most popular travel time. How is the climate & weather in Ethiopia? To the table of contents.

Ethiopia has a temperate climate, even though it is located in tropical Africa. As is common in the tropics, there are only slight differences in temperature between summer and winter, but the temperatures on the way from high to lowland rise rapidly. The climatic differences within Ethiopia are mainly influenced by the different altitudes.

The climate in Ethiopia is temperate. The different altitudes, however, are responsible for 3 different climatic zones. Up to a height of 1,000 m there is a humid or dry-hot climate (tropical-hot zone). Between 1,000 and 2,500 m, the climate is temperate with pleasant average temperatures of 20 to 25 ° C (warm temperate zone). Above 2,500 m, the temperatures are much cooler (cool zone). The Danakil Desert occupies a special position in the three-country corner of Eritrea, Djibouti and Ethiopia, which is considered one of the hottest places in the Africa. In this geologically active zone, daytime temperatures of more than 45 ° C prevail in the shade.

The precipitation varies greatly depending on the prevailing winds and altitude. It varies between an average of 500 mm annually in the lowlands and 2,200 mm in the mountainous regions. In the winter months, Ethiopia is under the influence of the Northeast Passat, which brings some rain to the region on the Red Sea. In the summer months, the Passat flows to North Africa, which leads to abundant rainfall in the northern highlands.

Rainfall does not fall evenly throughout the year, but focuses on 2 rainy seasons. The longer main rain falls in the months of June to September. This is followed by a longer dry period. The dry season is from October to June.

What to consider when buying souvenirs in Ethiopia?

Popular souvenirs from Ethiopia include religious items such as crosses and icons as well as traditional crafts such as hand-woven baskets, wood carvings and jewelery. By purchasing such properties, you can financially support the locals and promote the preservation of traditional craftsmanship. Bear in mind, however, that ancient pieces may not be executed. It is advisable to seek the advice of skilled local people when purchasing handicrafts in order to protect themselves from inflated prices. It is advisable to get receipts for all items you buy in Souvenir shops.